(Note: Price per Kg)
Common bermudagrass is drought resistant, grows on many soils, and makes a good turf if fertilized and mowed right. Common bermudagrass produces many unsightly seedheads, but in spite of this fault, it frequently is used on home lawns due to the ease and economy of establishment. Common bermuda may be planted from either seed or sprigs and with intensive management will provide a high quality turf. However, the newer hybrid bermudas are generally far superior. In Australia, bermudagrass is known as Couch grass.

Bermudagrass is also a major turf species for sports fields, parks, golf courses, and general utility turfs. It is found in over 100 countries throughout the tropical and subtropical areas of the world. Common Bermudagrass, C. dactylon, naturalized throughout the warmer regions of the United States, was introduced into this country during the colonial period from Africa or India. The earliest introductions are not recorded, but Bermudagrass is listed as one of the principal grasses in the Southern States in Mease's Geological Account of the United States published in 1807. 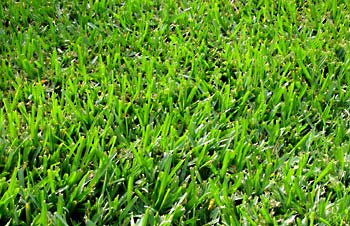 Prefers full sun, drought resistant, can withstand heavy traffic. Can easily be planted from grass seed (although it was once only grown from sod and the new seed varieties are not as fine bladed as the sodded varieties). One of the South's favorites grass types. Grows in tropical, subtropical and transition zone areas. Found extensively on lawns, golf courses, sporting fields and coast areas.

Turns brown with the first drop in temperature. There are more cold tolerant varieties available. In warmer tropical areas, Bermuda retains a beautiful green color year round. This is a very aggressive grass and flower beds or other areas will be quickly overrun if not kept in check. Once established it is very difficult to remove due to its extensive root system.

First mowing of the season: after danger of hard freezes has passed, set your mower to lower than normal to remove as much dead top-growth as possible. Normally in mid-March when the soil temperature is around 55. Don't mow below 1/2" or you could damage the plant. Bag the clippings for this first mowing. Lawn will turn green when soil temperature warms to 60-65. Once the lawn has greened, mow at your normal height (2" for common and 1 — 1-1/2" for hybrids).

Never reduce the height of your lawn by more than one-third when mowing. Removing more than this can cause scalping and may take a long time to recover, during which, the grass is more susceptible to stress and further damage.

Bermuda grass can be overseed to maintain a green appearance throughout the winter months by planting a cool season grass such as annual rye. Annual rye cannot withstand the summer heat and will die as temperatures rise.

The same characteristics that make bermuda grass an ideal grass for certain areas, also can create problems when it starts growing in areas where other species are growing. Bermuda spreads by both stolons and rhizomes. Kill the top and it continues spreading by the rhizomes. There are some commercial products available such as Fusilade II that can be applied in certain situations. Fusilade II is a herbicide that quickly moves through the shoots, roots, rhizomes, stolons and growing points of the treated plants. Two applications are recommended for controlling bermudagrass: once in the spring and again in the fall. It should not be applied when the desirable turf is under stress.

When bermudagrass has invaded cool season lawns, a non-selective control that contains glyphosate is required. This product will kill everything, so extreme care must be taken.